North Kitsap Fire & Rescue serves 46 square miles that are largely forested and rural with pockets of suburban density around communities such as Hansville, Kingston, Miller Bay, Indianola and Suquamish. The district is situated on the long and narrow northern tip of the Kitsap Peninsula, surrounded on three sides by water and 34 miles of shoreline. Areas served by NKF&R can be reached by land through Poulsbo from the south and west via Washington SR 16 from Tacoma or SR 3 from Shelton and Olympia. Seattle lies about 12 miles southeast of Kingston, and is accessible most directly by Washington State Ferries‘ Kingston – Edmonds or Bainbridge Island – Seattle routes. To the west of the district and across Hood Canal is the Olympic Peninsula, via the Hood Canal Bridge. Bainbridge Island is immediately south of the district, across the Agate Pass Bridge. 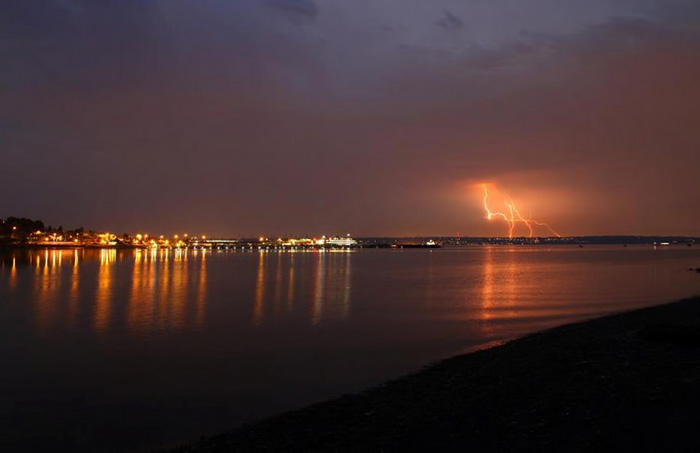 Kingston’s port and ferry terminal are lit up across Apple Tree Cove as lightning strikes across Puget Sound.

Washington State Ferries is the largest ferry system in the United States, and the Kingston ferry terminal is the system’s second busiest. Annually, ferry traffic brings an additional four million passengers and three million vehicles through NKF&R’s service area. The majority of the Suquamish Tribe‘s Port Madison Indian Reservation falls within the district. The Port Gamble S’Klallam Tribe‘s lands are immediately adjacent to NKF&R’s area and, by contract, the district provides service to an additional 5 square miles there.

North Kitsap Fire & Rescue is proud to work in partnership with the teachers and administrators of the North Kitsap School District through the National Fire Protection Association’s Risk Watch® curriculum in safety and fire prevention education. All kindergarten and most third grade classrooms participate in the program which includes at least four visits from NKF&R personnel; firefighters fit bike helmets, teach how to “save your breath” and the Heimlich Maneuver, emphasize being “buckled up in a booster in the back,” and stress the life-saving value of smoke alarms and fire escape planning. NKF&R also works closely with most of the preschools in its area because they know that prevention is the most effective means of protecting lives and property, NKF&R personnel are always looking for ways to reach more people with this life-saving information.  The district has entertaining and interesting materials to offer on a wide range of topics from seniors’ fall and fire prevention to children’s motor vehicle safety. To schedule a presentation, email the Community Services Specialist or call (360) 297-3619.