NKF&R is the product of four fire districts with rich and proud histories spanning more than seventy years.

We are proud to serve our district with fire suppression, emergency medical services & important safety programs.

Our mission requires a team, from Fire Commissioners, career responders and staff, to volunteers and interns.

North Kitsap Fire & Rescue is proud to serve in the protection of lives and property. 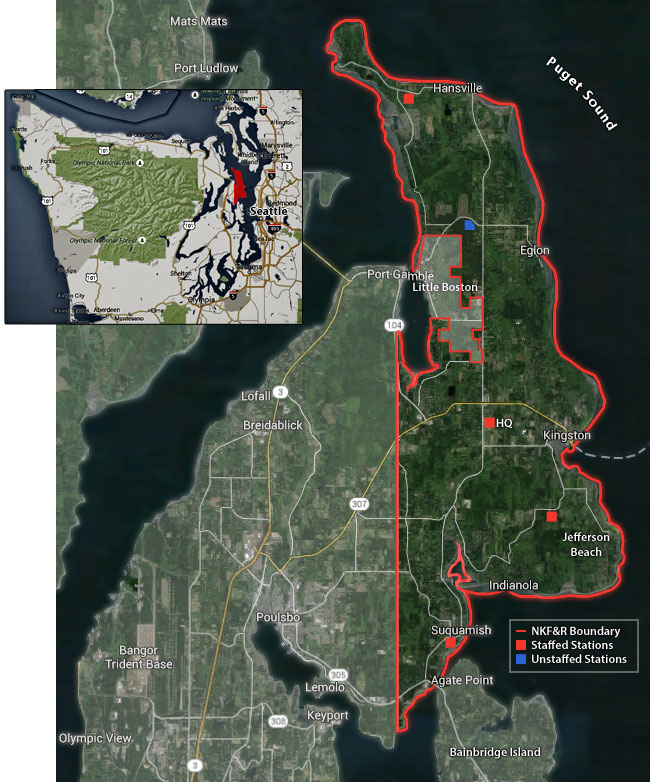 *Includes $1.6 million additional tax revenue from a four-year (2019-2022) special maintenance and operations levy approved by voters in the fall of 2018. About 2/3 of the M&O revenue is being spent on long-deferred capital projects such as station maintenance/renovation, firefighter safety gear and apparatus/vehicle replacement.

NKF&R’s north and east boundaries are defined by the shores of Puget Sound, with the western line running from Sandy Hook (near the Agate Pass Bridge) to just south of Port Gamble (and excluding the Port Gamble S’Klallam Indian Reservation). The fire district includes several small communities such as Hansville, Kingston, Indianola and Suquamish. There are no incorporated cities in the district.

NKF&R maintains four stations fully-staffed with firefighters 24 hours/day, 365 days/year. This configuration is the result of the district’s efforts to relocate its facilities and provide higher levels of service with 24-hour staffing. The district is proud to have an average response time to priority calls of about 7 minutes.

4911 NE Twin Spits Road | Hansville, WA 98340
Our Hansville satellite station was completed in September of 2001. Providing first response to the communities of Hansville, Driftwood Keys, Shorewoods and Cliffside, at least two firefighter/emergency medical technicians are assigned to the station every day. (Map)

26642 Miller Bay Road NE | Kingston, WA 98346
Completed in the fall of 2001, NKF&R’s headquarters facility in Kingston houses the district’s administrative personnel as well as response crews. The station is staffed with a minimum of five personnel: shift battalion chief, one or two firefighter/paramedics and two or three firefighter/emergency medical technicians. The department’s apparatus maintenance facility as well as a training tower/drill ground are also located at this site. (Map)

18533 Augusta Avenue | Suquamish, WA 98392
NKF&R’s Suquamish station was originally built in the 1960’s and remodeled to house 24-hour staff in 1996. A minimum of two firefighter/emergency medical technicians are assigned to this station, though the facility can accommodate as many as eight. (Map)

The district also operates one volunteer station which, unlike NKF&R’s other four stations, is not staffed continuously.

35100 Little Boston Road | Kingston, WA 98346
NKF&R’s Eglon station was originally built as a private residence. Off-duty members of the district’s Volunteer-Intern Firefighter Training Program live in the house and a pumping water tender, assigned to the station, is kept in the detached garage.

While our firefighters welcome routine visits to any of our stations, crews may not be available when you stop by. Their duties often take them away from the stations on emergency responses, training and other duties. For this reason, it’s always best to call 9-1-1 if you have an emergency.