NKF&R provides emergency response to a variety of situations, from fires and medical incidents to trees across roadways, flooding problems and more. In 2019, the department answered 3,364 calls for emergency assistance.

Since repositioning the district’s stations and assigning full-time crews to all of these facilities in 2002, NKF&R has made significant improvements in response times.  Seconds count in emergencies, and NKF&R personnel remain committed to providing safe and effective response as quickly as possible. Learn more about the apparatus — fire engines, water tenders, ambulances, brush truck and marine unit — that the district uses to respond.

Despite an emergency response workload that averages 9.2 calls across the district per day, NKF&R crews still invest their time between emergencies in a wide variety of other activities:  training and education … equipment, station and grounds maintenance … pre-fire planning … physical fitness … records management … public education and community involvement activities … special projects and much more.

Nearly two-thirds of NKF&R’s alarms are calls for medical aid. From injuries sustained in car crashes to possible heart attacks, the department provides both basic and advanced life support services.

Basic life support services are provided by personnel who have completed at least a 112-hour course, and have earned Emergency Medical Technician (EMT) certification.  EMTs are permitted to administer oxygen and certain other medications, utilize automated external defibrillators (AEDs), care for wounds and fractures, perform CPR. Our EMTs are also skilled at determining the severity of a medical situation and, if necessary, calling for additional resources to ensure the best possible care.  Nearly all of the department’s response personnel are EMTs, and every piece of department apparatus (including fire engines) is outfitted with medical equipment.

About 30 – 40% of medical calls are serious enough to warrant the advanced life support skills of a paramedic. These professionals log an average of 2000 hours in initial training.  They’re authorized to establish intravenous lines for fluids and medications, administer certain life-saving and pain-killing drugs, intubate (protect the patient’s airway by inserting a tube into the trachea/windpipe) and much more.  Every day there is at least one paramedic on duty to serve NKF&R’s citizens.

Emergency medical response is made possible by a six-year, voter-approved property tax levy that permits the department to collect $0.50/$1,000 of assessed valuation. The levy was last renewed in November 2019, and earned an 78.8% “yes” vote. 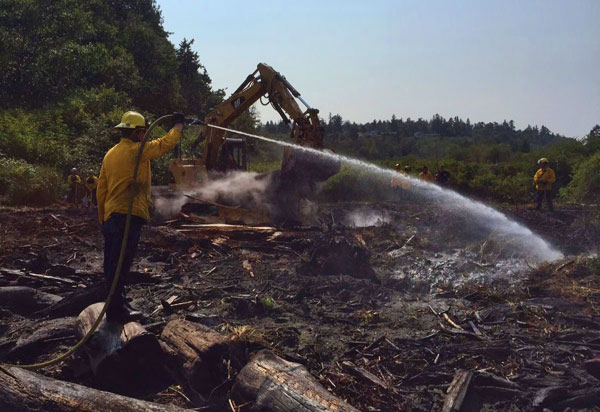 After containing the brush fire at Point No Point Beach in Hansville (July 2015) crews still had to work hard at digging up hot spots to make sure it was completely out. An excavator and its operator from Kitsap County Public Works was on scene to help.

Reports of wires down, outdoor burning complaints and fire alarm activations are NKF&R’s most common non-medical responses. “Working fires” — those in which crews must perform fire extinguishment or other similar activities — generally comprise less than one-quarter of all fire-related calls. In 2019, NKF&R crews responded to 24 working structure fires.

Brush fires are the most prevalent type of “working fire” every year. In 2019, firefighters responded to 30 of these incidents.

The district has apparatus and equipment to battle most types of blazes.  Property and business owners within NKF&R’s service area enjoy a fire insurance rating of 4 with water tender credit for structures within 1000′ of a fire hydrant.  Although fire hydrants are located throughout the district, NKF&R deploys tanker trucks — each carrying thousands of gallons of water — to ensure adequate water for firefighting throughout our semi-rural communities.