The following tables and charts provide an overview of the District’s 2018 funding. The beginning fund balance (or “operational reserve”) serves several purposes, providing the resources to meet expenses during the first months of the fiscal year until property taxes begin arriving at the end of April. The fund also provides a “rainy day” reserve and includes designated capital improvement monies. Decreasing property values between 2009 and 2013 impacted the District’s revenue stream despite leaders’ efforts to adapt to these pressures. Since 2013, the beginning fund balance has suffered from the on-going effects and, in 2018, it still had not been restored to its 2012 level. 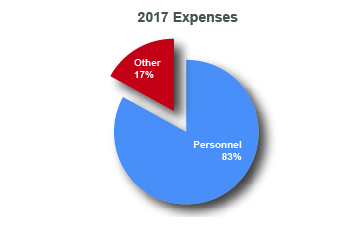 Personnel costs comprise the vast majority of the District’s expense budget, as shown in the 2017 Expenses chart. After doing their part to hold down costs by foregoing industry-standard raises for four years, employees have received modest cost-of-living-adjustments for 2015 – 2017. Training and supplies budgets remained tight, leaders continue to pursue a wide range of cooperative efforts with the goal of reducing expenses by sharing costs with other agencies, and the District has deferred most vehicle replacement as well as major maintenance and improvements on its stations. 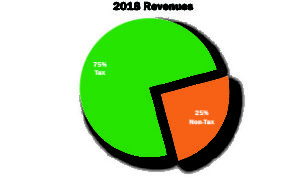 of up to $1.50 per $1,000 of assessed valuation. With voter approval, agencies can levy up to $0.50 more to provide emergency medical response. The community has enthusiastically supported emergency medical services (EMS) levies since they were first introduced in the mid-1980s. Voters last reauthorized NKF&R’s EMS levy in November 2013 for collection over six years, beginning in 2014. That temporary levy expires in 2020, so the District plans to propose its reauthorization in November 2019.

Due to voter-approved initiatives, the total amount collected from the fire and EMS levies cannot exceed 101% of the highest amount collected previously on existing properties except under certain narrow circumstances. These caps are applied to each levy’s total collection but each property owner experiences different increases or decreases due to variations in individual properties’ assessed valuations and other factors. 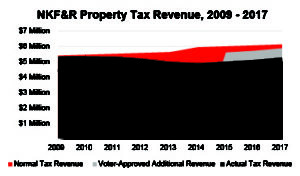 During normal economic conditions, the total assessed valuation of properties in the fire district rises annually. Levy rates are adjusted downward to keep a district’s total collections on existing properties within the 101% limitation. In the first year that a property comes onto the tax rolls, it is referred to as “new construction.” The revenue from new construction isn’t subject to the 101% limitation, and it is calculated separately at the previous year’s levy rate(s).

But during the real estate downturn that started in 2008, property values plummeted along with the amount of new construction. As the district’s assessed valuations fell and expenses continued to increase, levy rates were raised to provide 101% of the previous year’s total levy necessary to help meet rising costs. When the levy rates reached their respective statutory limits and property values continued to drop, the District took in less in tax revenues, too.

Despite recent economic recovery, statutory limitations prevent the District from regaining sufficient lost revenue without voter approval. So, in an effort to maintain levels of service after successive years of declining revenues and rising costs, the District proposed a special levy to voters in November 2014. It was approved by 67% of voters, and added an annual $600,000 to the District’s budgets from 2015 – 2018. Without the temporary addition of these funds, the District’s 2015 tax revenues would have totalled less than they did in 2009.

The 2014 maintenance and operations levy expired at the end of 2018. Also in 2018, the District’s 1999 capital bond issue was paid off and taxes for both measures are no longer collected in 2019. In November 2018, the District proposed a replacement maintenance and operations levy which was approved by over 73% of voters. The temporary measure authorizes a special levy of $1.6 million per year for four years, and also provides funds for apparatus replacement and facilities maintenance needs that couldn’t be deferred any longer.